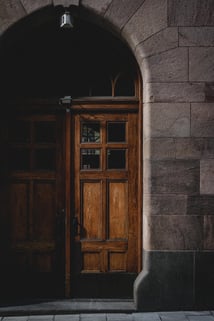 *This is the first in a three-part series on considerations when purchasing older buildings.

Purchasing a building that is 25-years-old or older requires a significant historical investigation and analysis to determine the risks associated with the building.  These articles are intended to aid any investor attempting to answer the following questions:

A building’s “useful life” depends on its previous ownership, intended use, and prior maintenance regime.

The Intended Useful Life of Government and Major Public Buildings

Not all buildings are equal.  Government buildings in the capitals of Europe have been in use as government offices for hundreds of years.  Westminster Hall, which had housed the British Parliament since the 13th century, was destroyed by the fire of 1834.  Until that fire, it had been in use for over 600 years before it was rebuilt.  In nearby London, Westminster Abby has operated as a national church building for 750 years.

Although the United States Capitol (also called the Capitol Building) was not completely finished when the U.S. Congress first met there on November 17, 1800, it has been a continually functioning government building for nearly 219 years.

Obviously, it was the intent of the architect and the government that these national buildings be built to last as long as possible. Thus, they used the highest quality of workmanship and materials in their construction.  Unlike a private sector commercial building, a government building will be maintained properly and refurbished as needed, at the government’s expense (an entity that has taxing authority and the ability to print money).

Clearly, government and major public buildings are designed to last much longer than a normal commercial building or a rental housing property.  However, the design of commercial buildings and rental housing is ultimately tied to market and economic realities.  Economic forces require businesses to spend as little as possible on the building, but still make it a viable income generator.  If the developer plans on constructing a building, leasing it up, and selling it, then the developer will be more concerned about initial capital costs than the cost to operate and maintain the building during its useful life.

Also, over time, the intended design of the building may need to change.  Hospitals are good examples of buildings that seem to always have construction contractors making functional improvements to the buildings.  Fashions also change.  A perfectly good commercial building might be demolished simply because it is “out of fashion” and its owner wants to project a new image to attract clients and customers.

For these reasons, the typical useful life of a commercial building is generally considered to be between 50 and 60 years and even less for rental housing properties.  Additionally, all buildings need regular updating to keep up with the times as their design features, plumbing, electrical, and HVAC equipment become outdated or worn out.  As a practical matter, many building owners are mostly concerned with the building’s current cash flow and typically don't build up replacement reserves to keep up with the maintenance required to keep individual elements of the building from failing.  This makes it hard for some buildings to achieve even their planned useful life.

The concept of a building’s “useful life” as discussed above and elsewhere in this article is not to be confused with the definition used by the U. S. Internal Revenue Service (IRS) for calculation of depreciation.  That calculation was determined by the U.S. Congress and is a political construct, not an estimate of the actual physical useful life of a building.

For IRS purposes, owners of commercial real estate can reduce their tax bill by depreciating the actual cost of the property, less land, over a set number of years (defined by the IRS as the building's “useful life”).  This amount can then be deducted from the property’s actual reported actual income.  In a theoretical accounting sense, the depreciation period is the “recovery period” to allow the building’s owner to set aside enough of the building’s income to fully recover his or her investment in the building (less the land, which will still be available for the owner’s use).

The IRS allows 27.5 years over which you can depreciate residential rental buildings and 39 years for retail and other commercial structures.  This shorter IRS depreciation period accelerates both the building’s economic and physical “depreciation,” which is the decrease in value that occurs to a building over time.

How Long is the Physical Life of a Commercial Building Estimated to Last?

A consensus of those attending a 2016 Californian architectural colloquium on the physical life of buildings estimated that the average lifespan (physical life) of a conventionally built commercial building (masonry and wood) is about 120 years.  However, they estimated that for modernist buildings (reinforced concrete and glass curtain wall) it's about 60 years.  This did not take into account the issues that can shorten a building’s useful life for both the conventionally built commercial building and the modernist building. (1)

The useful life of an asset is an accounting estimate of the number of years it is likely to remain in service for the purpose of cost-effective revenue generation.  This means that the building’s revenue, less operating and capital expenses, provides enough free and clear cash flow to provide a “market acceptable” capital rate on the full investment.

This is different than the physical lifespan of a building.  The amount of time a building might be useful to a business may not always be the same as the building’s physical lifespan.  A technological advance could make a building outdated for its original intended use.  This could be, for example, a large downtown, multistory, windowless building used by the telephone company to house very large and complicated “electromechanical telephone-switching gear” that the computer made obsolete.  In this case, an adaptive reuse or repurpose of the building may be the best option.

Five Stages of a Building’s Life

Notwithstanding the differences between individual buildings, it has been determined that many buildings follow a similar pattern as they pass through different stages in their respective life cycles.  The five building life stages or categories described in the chart below were first described by David Albrice in the Jan. 28, 2015, RDH Building Science Journal.

In this regard, five general life cycle stages have been identified and, using the analogy of the human body, they are summarized conceptually in the chart below. 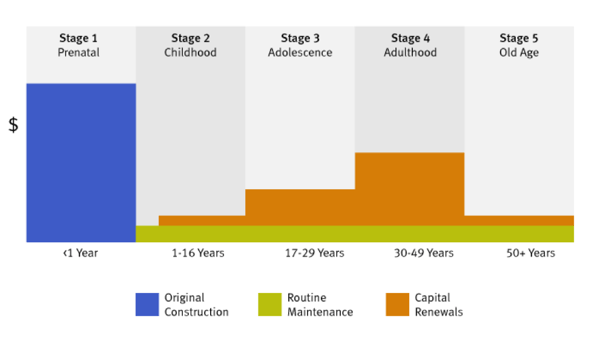 The five building life stages or categories described in the chart above are as follows:

Stage 1 - “Pre-Natal” (under 1 year)
“During this stage, the building is in the process of being handed over from the developer to the first owners.  The assets are new and are covered under a variety of warranties.  Maintenance requirements are focused on cleaning activities and periodic inspections.”

Stage 2 - “Childhood” (1-16 years)
“During this period, the owners have assumed full responsibility for all the maintenance, repairs and long-range renewal planning for the building.  With two years of expenditure experience, the owners have established a preventive maintenance program and are allocating monies to the long-range reserve fund.  The owners are starting to address some relatively small renewal projects, which are addressed in more detail in the next section.”

Stage 3 - “Adolescence” (17-29 years)
“It is during this 3rd stage that the owners may find that the maintenance budgets established during the 2nd life stage are no longer adequate to address the impending replacement of building assets that have deteriorated and reached the end of their useful service lives.  This phase is represented by a noticeable increase in the number of capital renewal projects.  This life stage often compels owners to seriously reconsider their historical budgeting practices and to make more reasonable funding allocations for asset renewals as the building moves through life Stage-3 and into Stage-4."

Stage 4 - Adulthood (30 to 49 years)
“The largest and most expensive of all asset renewal projects tend to occur during the 4th life stage.  As a result, significant funds will need to be reinvested in the building and the standard operating and maintenance budgets will need to be revisited. Some of the assets have been replaced over the preceding 30-40 years and the owners and manager are now operating a building with assets at a variety of different ages.  There is no longer a single baseline and the facility managers are tasked with tracking the different assets.”

Stage 5 - Old Age (50 plus years)
“At this juncture, all the major assets have been through one renewal cycle.  Therefore, life Stage-5 is essentially a return to life Stage-2.  The owners must now prepare for the next cycle of asset renewals as the building moves beyond its 50th anniversary and embarks upon the next 50 years of operations.” (2)

What this chart points out is that a well-cared-for 50-year-old building is expected to have had its previous owners invest total capital renewals into the building over its lifetime equal to 75% of its original building cost!

When purchasing an older building, it is critical to know how much total capital renewal investment has been previously invested into the building between the time of new purchase and year 20.  An investigation into the history of the building is the only way to know what capital renewal costs to expect after the building is purchased.  This historical research must be part of any due diligence efforts.

Please be sure to read Part 2 of this series, where we will help you evaluate the factors affecting (and how to avoid) the physical deterioration and obsolescence of an older building.

Charlie Dunlap, a former partner of Trammell Crow, is the Founder and Chairman of RRA Companies. His more than 50 years of experience in the industry has involved the development, construction, rehabilitation, and management of assets valued at more than $2 billion. He has developed, built, or rehabilitated more than 10,000 housing units, managed over 11,000 apartment units, and managed or developed industrial, office, and retail properties in excess of half a million square feet. Mr. Dunlap has been named the Arizona Certified Property Manager of the Year and was presented with the Phi Epsilon Professional Award from Arizona State University.